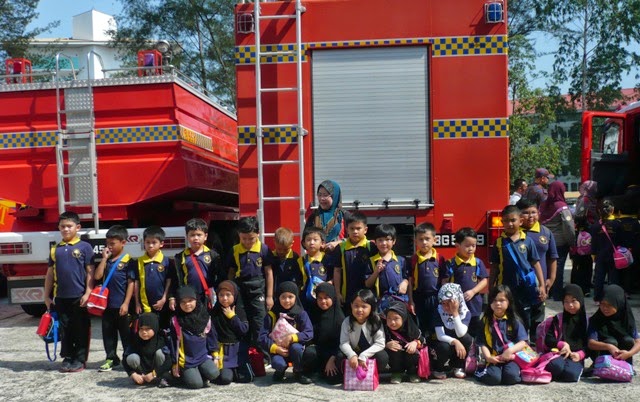 Upon arrival the visitors were greeted by Assistant Superintendent Fire Rescue (ASFR) Norzali bin Apong, FRD public relation officer as well as officers and personnel of the Berakas Fire Station and Women Operation Unit. During the visit the group gain their firefigheting experience such as Turntable Ladder (TTL) ride where some of the students view the surrounding of the Old Airport Government Complex from above. 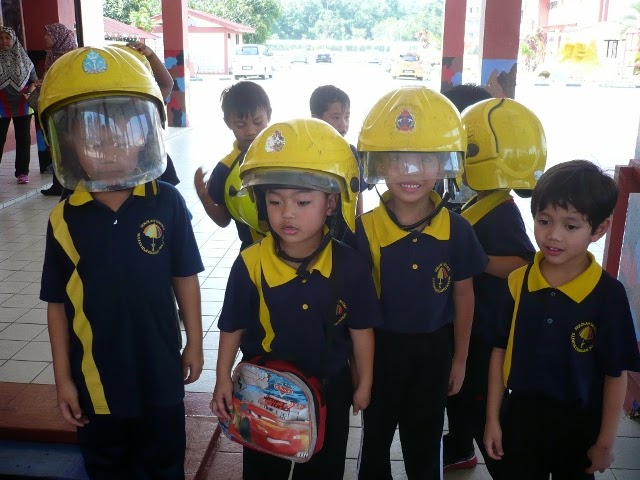 The visit is aimed to showcase the students on firefighting and rescue duties of the Fire Rescue Department (FRD) as well as to create awareness on fire safety in school as well as in their homes.

Beside TTL ride they also brought for fire engine ride around Old Airport Complex as well as wearing the firefighting helmet. The visit concluded with the light refreshment and ASFR Norzali handing the souvenier to YAM Pengiran Anak Abdul Hafeez and the school representative. 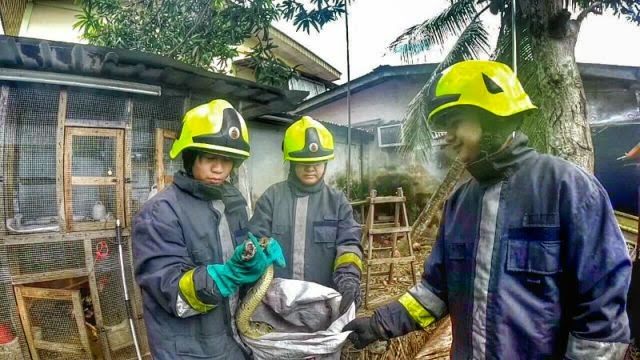 A large sized python was caught this morning at a house compound in Menglait. The incident which occurred around 11:30 am  (31 May 2014, Saturday) saw the python was spotted by the house residents lying near the chicken pen at a house in Simpang 51-38. The residents then alerted the Fire Rescue Department (FRD) which dispatched a team of firefighters in two fire engines from Berakas Fire Station and Women Operation Unit. Upon investigation by the firefighters they found that the reptile also had eaten chickens from the pen which caused it to rest and easier to caught.
Posted by Hj. Afiq at 7:10 AM No comments: 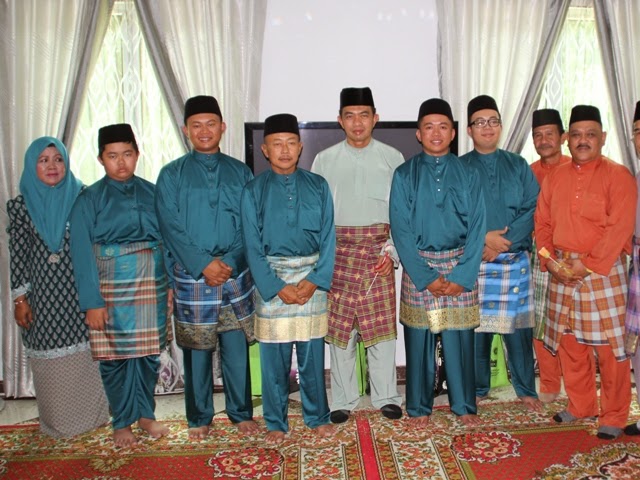 The ceremony started with the conversion oath and recital of “Dua Kalimah Syahadah” observed by the Religious Officers led by Senior Fireman (ABK) Jaya bin Tunggoi followed by his four sons and wife. They chose their Islamic name respectively. To mark the ceremony a dikir syarafil anam and sprinkling of bunga rampai was also held.

To conclude the ceremony the director also presented Islamic Da’wah Centre and FRD souvenier to the family.
Posted by Hj. Afiq at 4:30 AM No comments: 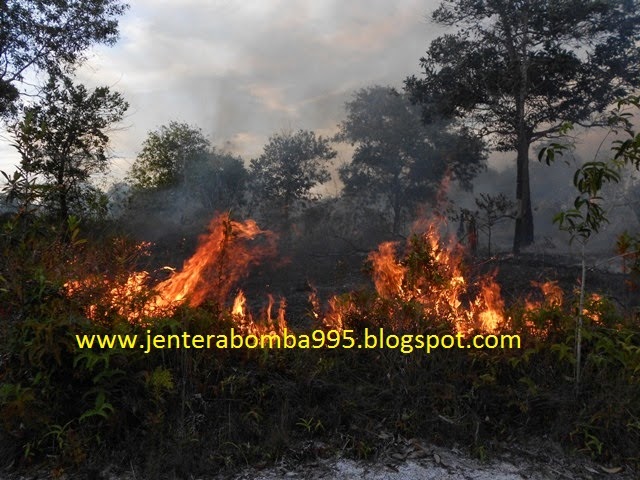 A major bushfire destroyed several hectares of bushes last Friday (9 May 2014, Friday). The fire which occurred around 4pm at the bushes near Brunei Islamic College, Tutong Town caused thick smoke and flames rises from the scene and can be seen as far as the Muara-Tutong Highway. A team of four firefighters led by Assistant Station Officer (ASO) Abd Aziz in a fire engine from Tutong Town rushed to the scene to fight the blaze. They had to face the thick bushes in order to control and extinguish the blaze which started in the middle of the bushes. By 7pm the fire had been under control and the firefighters still on the scene to monitor the situation. According to the firefighters due to the current hot and dry season the Tutong District Operational E command personnel are busy attending numbers of forest and bushes fire which are caused by weather condition as well as human factor such as open burning.
Posted by Hj. Afiq at 4:31 AM No comments: 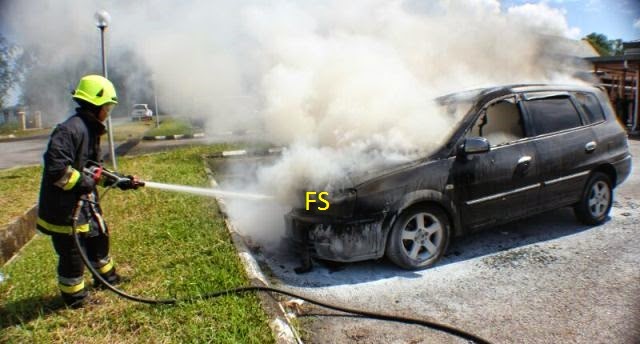 A multi purpose vehicle (MPV) caught fire in Anggerek Desa this morning (26 April 2014, Saturday). The incident which occurred around 9:30am at the Anggerek Desa Commercial Centre parking lot, Jalan Kebangsaan. The fire started from the MPV engine section before spreading to the body. A team of firefighters in two fire engines from Berakas Fire Station and Women Operation Unit rushed to the scene after receiving emergency call from the public. They managed to control and extinguish the blaze in several minutes. Also present was police personnel from Berakas Police Station which cordoned and controlled the scene as the firefighters extinguishing the blaze. The cause of the fire are still under investigation and no injuries are reported in the incident.
Posted by Hj. Afiq at 4:28 AM No comments:

Forest fires in Tutong and Belait

Several areas in Belait and Tutong Districts are currently affected by the forest and bush fires which occurred due to the hot and dry weather condition. The fire also cause slight haze at the affected areas. 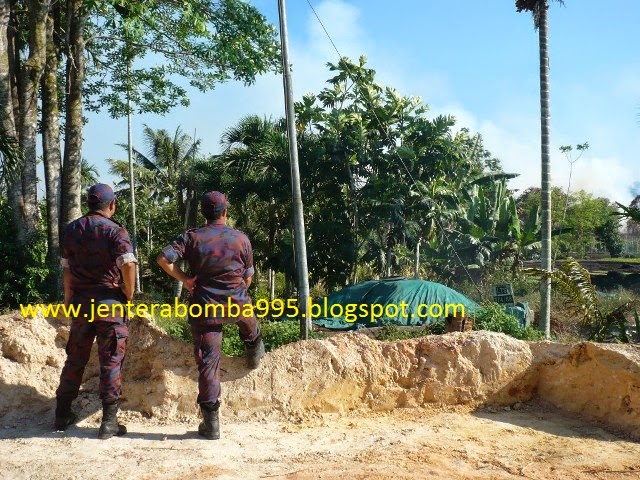 In a visit recently (21 April 2014, Monday) at the forest fires at Seria Bypass, Belait District saw firefighters are still on the fire site. The affected areas are divided into two sector where the first sector are at the lane heading to Seria where the fire had occurred for nearly a week while at the second sector is at the lane heading to Lumut is the new site which ignites recently. The fire saw the deployment of firefighters and fire engines from Seria Fire Station. They also face challenge as the area are inaccessible for fire engines as well as the absence of open water source at a sector. The fire engines had to take turn shuttling water with the aid of the trailer pump which is used to pump water to the fire site and fire engine. 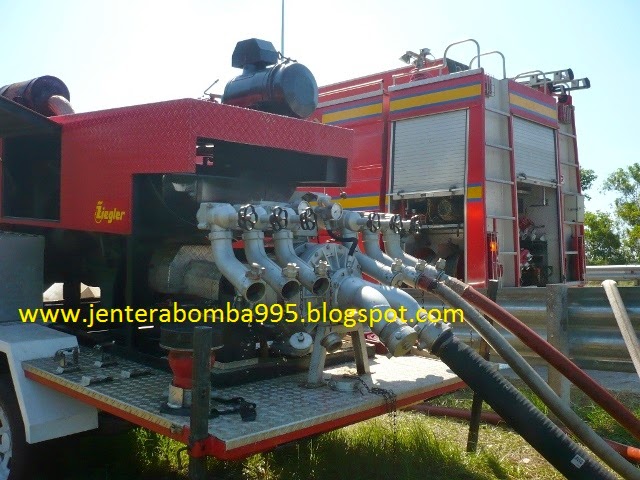 This afternoon also saw the fire spread on the peat swamp forests at the roadside with the aid of windy and dry weather which cause a section of the Seria Bypass covered in smoke. The firefighters also had to use flooding technique to flood the peat swamp in order to extinguish the blaze. However the operation are suspended in the night time for the safety of the personnel. Traffic cones are also placed at the area to warn motorists on the operation zone.

Meanwhile at Tutong District a number of bush and forest fire occurred at rural Tutong. Around 12pm two bushfire occurred at Jalan Sekolah Rendah Penapar and near a turn in Penapar village which cause thick smoke rising and covering the village. A team of firefighters in a fire engine from Lamunin fire station later arrive after receiving emergency call from the villager. They managed to extinguish the fire in few minutes.

The Tutong fire station also fully deployed in since 1pm after they receive emergency call on forest and bushfires in Jalan Pengasing near Seri Kenangan Beach, Kampong Danau, and Kampong Bukit Udal. While at Lubok Pulau village a team of firefighters and a fire engine led by Deputy Station Officer (DSO) Said had to monitor closely a forest fire which reignite due to the dry weather condition to prevent it from reaching the nearby houses, farms and mosque.

Due to the current hot and dry weather the Fire Rescue Department (FRD) saw the number of rising forest and bush fire cases. The public are also advised to avoid open burning as well as drive cautiously at the affected area due to the movement of firefighters and fire engines.
Posted by Hj. Afiq at 7:55 PM No comments:

A bushfire destroyed several hectares of bushes in Lorong Tiga area, Seria last Sunday (20 April 2014, Sunday). The fire which occurred at the bushes opposite the Lorong Tiga Housing Area Mosque caused the area covered in smoke. 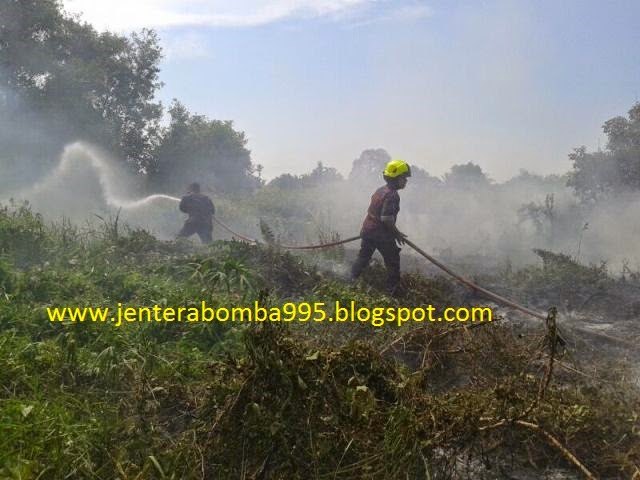 A team of firefighters in a fire engine from Belait Fire Station rushes to the scene after receiving emergency call from the villagers as well as covering their counterparts from Seria Fire Station who are also busy fighting the forest fires in Anduki and Seria Bypass. They managed to control the fire within minutes with the help of several passerby.

Currently several areas in the Belait District are affected by the current dry weather thus keeping the Operational B command Belait District firefighters as well as the Brunei Shell Fire and Emergency Response (BSP FAERS) busy responding to forest and bush fires across the district. The public are also advised not to conduct open burning or bonfire withour supervision or during fishing and farming as it might cause major incidents such as forest and bushfires.
Posted by Hj. Afiq at 7:11 AM No comments:

If you need permission to use the photos published on this site just contact me directly at e-mail me at my Yahoo (afiq_113@yahoo.com).
To conduct visits to fire stations or inquiry about the Brunei Fire Rescue Department you may contact the Public Relation Unit at:
+673 2380402 ext 111 or 112

Our pictures are used by: 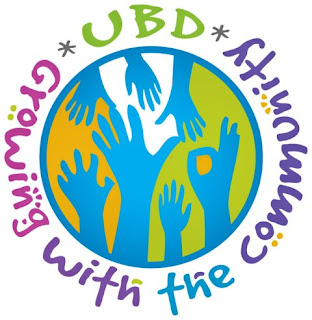